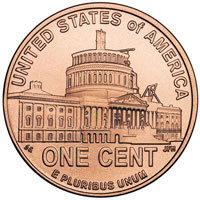 The 2009 Lincoln Cent (Buy on eBay) features four different reverse designs, which were released into circulation at roughly equal intervals throughout 2009. This was followed by the introduction of a fifth and permanent design change released in the follow year.

The release date for the first 2009 Lincoln Cent design representing Lincoln’s birth and early childhood took place on February 12, 2009. This date was chosen because it was the exact 200th anniversary of Abraham Lincoln’s birth. This same date was also be used for the release of the 2009 Lincoln Commemorative Silver Dollar. The three other designs for 2009 were released approximately every three months throughout the rest of the year.

The full release schedule appears below.