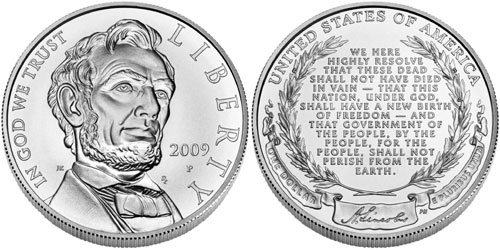 On February 12, 2009, the US Mint released a commemorative silver dollar to honor Abraham Lincoln. This coin was authorized under Public Law 109-285, the Abraham Lincoln Commemorative Coin Act, which required the Secretary of the Treasury to mint coins in commemoration of the bicentennial of the birth of President Lincoln.

The obverse of the 2009 Lincoln Commemorative Silver Dollar (Buy on eBay) features a portrait of Abraham Lincoln displaying his strength and resolve. The obverse was designed by Justin Kunz, after a sculpture created by Daniel Chester which resides in the Lincoln Memorial. The inscriptions include “Liberty”, “In God We Trust”, and “2009”.

The reverse of the coin was designed and sculpted by Phebe Hemphill.  It features the final 43 words of the Lincoln’s famous Gettysburg Address. The following words appear, surrounded by a laurel wreath: “We here highly resolve that these dead shall not have died in vain – that this nation, under God shall have a new birth of freedom – and that government of the people, by the people, and for the people, shall not perish from the earth.” Additional reverse inscriptions read “United States of America”, “One Dollar”, “E Pluribus Unum” and a reproduction of Lincoln’s signature.

After approximately one month of availability, the 2009 Lincoln Commemorative Silver Dollars sold out of the 450,000 coins allotted to individual sales. Later in the year, the United States Mint issued the Lincoln Coin and Chronicles Set, which included the proof version of the commemorative silver dollar. This specially issued set was limited to 50,000 and sold out within days.